Kampala is Uganda's national and commercial capital bordering Lake Victoria, Africa's largest lake. Hills covered with red-tile villas and trees surround an urban centre of contemporary skyscrapers. In this downtown area, the Uganda Museum explores the country's tribal heritage through an extensive collection of artefacts. On nearby Mengo Hill is Lubiri Palace, the former seat of the Buganda Kingdom.

Established on rolling hills some 10km off northern Lake Victoria shores, Kampala City is the conventional African capital. More verdant than many of its regional counterparts, not relatively so crowded or chaotic as others —but practically the familiar contrast of a bustling compact high-rise city center rising from a leafy suburban sprawl, increasingly organic as one reaches its rustic periphery. It has a contrasting atmosphere of modern urban bustle and time-warped tropical languor. Kampala is linked to Entebbe’s international airport by a smooth-surfaced highway passing through a lush cover of broad-leaved plantains that make for a fascinating introduction to Uganda.

Coming by air, you’ll land at Entebbe International Airport (EBB, 3km from the town center, and if your main interest is natural history, then we’d advise you to stay over in Entebbe rather than heading on to the capital. Kampala is the pulsating heart of Uganda’s cultural and intellectual life, nightlife. It also lies at the international and domestic long-haul bus network hub, making it an attractive base for independent travelers seeking a taste of urban Africa.

The capital city, an economic and social hub of Uganda, is also the country’s largest urban center, with a population of 3.1 million (Microtrends 2020). Kampala, like Rome, was originally built across seven hills. Today, that figure is more like two dozen hills.

Although Captain Fredrick Lugard is generally considered the founder for setting up camp on Kampala Hill in 1890, the surrounding hills had lain at the Buganda Kingdom’s political center for several decades before Lugard’s arrival. Kasubi Hill, only 2.5km northwest of the modern city center, served briefly as Kabaka Suuna II’s capital in the 1850s. It also housed the palace of Kabaka Mutesa I from 1882-84. Mengo Hill formed the capital of Mutesa’s successor Mwanga, as it has every subsequent Kabaka.

Kampala derives from the Luganda saying ‘Kosozi Kampala,’ meaning ‘Hill of Antelope.’ A reference to the domestic impala antelope that grazed the lawns of Mengo during Mutesa’s reign in the 1880s.

Kampala lies at the Kingdom of Buganda’s political and geographical heart, home to the Baganda tribe, which makes up the largest Ugandan ethnic group. However, they represent only about 17 percent of the population.

In the first decade of the post-independence era, most people widely regarded Kampala as the East African community’s showpiece: a big garden city with a cosmopolitan atmosphere and bustling trade. It was also a cultural and educational center of note, with Makerere University regarded as east Africa’s academic heart. Under Amin, however, Kampala’s status started to deteriorate, especially after president Amin forced the Asian community to leave Uganda in August 1962.

Kampala today is practically unrecognizable from its pot-holed, war-scarred incarnation of the mid-1980s. The main shopping area along Kampala Road could be that of any African capital and has recently had a clutch of bright, modern skyscrapers, supermarkets, and shopping malls popping up. The area immediately north of Kampala Road, where foreign embassies and government departments rub shoulders with pioneer tourist hotels, is smarter than any part of Nairobi or Dar es Salaam. An image compromised somewhat by the scavenging marabou storks that flop gracelessly between their treetop and lamppost nests.

Horrendous traffic apart, Kampala is a pleasant enough city, remarkably safe by comparison with Nairobi or Dar es Salaam’s likes. Its glut of restaurants, nightclubs, bars, cinemas, and other modern facilities has made it a popular place for Africa safari overlanders and safari backpackers to hang out for a few days. Its attractions are perhaps less compelling to fly-in tourists with more significant time restrictions. 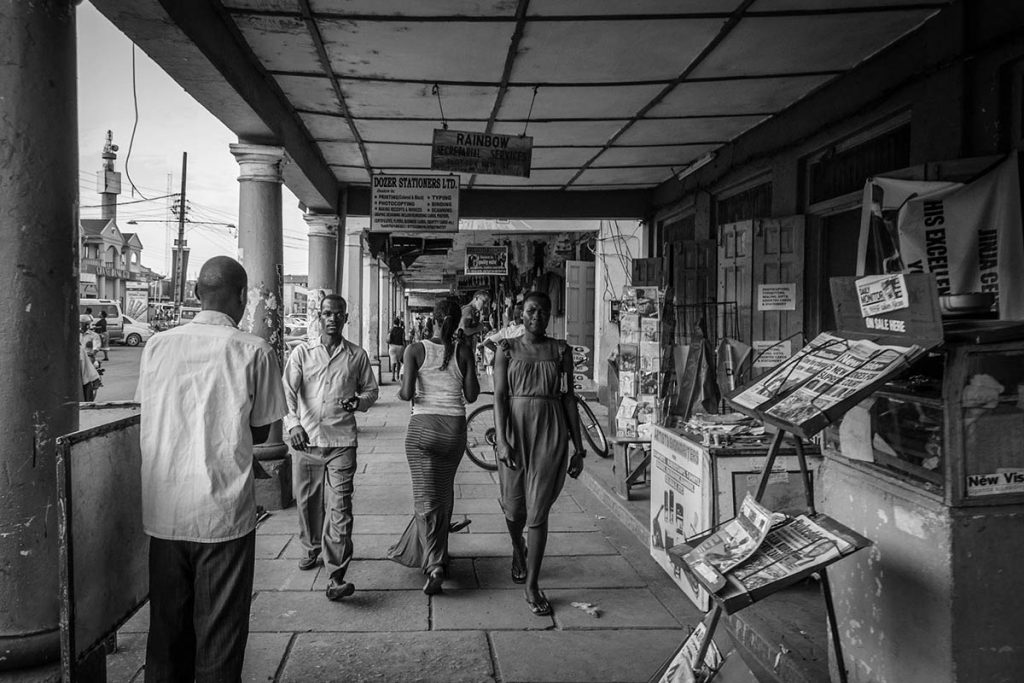 Most Uganda travelers restrict traditional sightseeing within the city limits, the Kasubi Tombs and the National Museum, but several other worthwhile interest sites lie within day-tripping distance. These include organized excursions to raft the White Nile grade five rapids near Jinja or visit the chimpanzees of Ngamba Island and more low-key goals such as the Entebbe Botanical Garden, Mabira, and Mpanga forest reserves and Mabamba Swamp.

In addition to these conventional attractions, be sure to take a walk through the city’s various other quarters for a fascinating (if somewhat depressing) cross-section of the extremes of wealth and poverty that characterize so much of Africa. The overcrowded back streets running downhill from Kampala Road, congested with hooting minibus-taxis and swerving boda-boda drivers, reveal a more representative facet of Kampala. The city as most of its residents see it —yet, even so, the rundown streets sparkle with an economic dynamism that was absent as recently as 1995.

Explore Uganda Your Own Way!

Take a looks at some of our private-tailor-made safaris that you can customize with the help of a safari expert to suit your style of travel.