Lake Bunyonyi’s exotic landscapes that are a magnet for local and international travelers place it on this list of top 10 destinations in Uganda. Dotted with at least 20 small islands and encircled by steep terraced hills, Bunyonyi is a magical spot. It has been a popular day trip out of Kabale for decades. Over the past few years, the lake has further gained popularity thanks to a proliferation of budget and other campsites and resorts around the small fishing village of Rutinda (also known as Kyabahinga) and nearby islands.

Lake Bunyonyi’s exotic landscapes that are a magnet for local and international travelers place it on this list of top 10 destinations in Uganda. Dotted with at least 20 small islands and encircled by steep terraced hills, Bunyonyi is a magical spot. It has been a popular day trip out of Kabale for decades. Over the past few years, the lake has further gained popularity thanks to a proliferation of budget and other campsites and resorts around the small fishing village of Rutinda (also known as Kyabahinga) and nearby islands.

Bunyonyi is a local name translating to “little birds,” which references the prolific weaver colonies along its shore. Larger birds are also represented by grey-crowned cranes, African harrier hawks, and various herons and egrets. Other common sightings include the levillant cuckoo, white-tailed monad, slender-billed baglafetch, cardinal woodpecker, and the African kingfisher.

The lake is large and irregularly shaped with numerous islands and the surrounding hillsides, which locals have beautifully cultivated like parts of Nepal. The area is vibrant with activities like canoeing, cycling, or hiking.

Also in its favor is the high-altitude location, which ensures a moderate climate (often becoming quite chilly at night) and a relatively low incidence of malaria. Health authorities have reliably reported the absence of Bilharzia and crocodiles and hippos, which means the lake is very safe for swimming adventures.

Active travelers will be excited that the easy availability of canoes, kayaks, and mountain bikes for hire, and enough potential excursions to keep one busy for days.

Things to do around Lake Bunyonyi

What makes Lake Bunyonyi a top destination in Uganda is the endless opportunities for the Lake Bunyoni region’s activities. Many villagers around the lake, several of the guesthouses, and campsites have boats for hire. It isn’t challenging to arrange a canoe trip on the lake. Canoeing is a popular activity, and you can rent dugouts from most of the camps. Charges are pretty reasonable but practice for a while before heading off on an ambitious trip around the islands, as many tourists end up going round and round in circles, doing what’s known locally as the mzungu (corkscrew).

There is endless nature walking opportunities in the area, and for those who want a challenge, you can boat across the lake before trekking down to Kisoro. Guided walks are also popular, and these can usually be arranged through camps here. However, if you want a relaxed amble along the shores of the lake, it is straightforward enough to find your own way.

You can hire a Mountain bike (per day USD 10) from Bunyoni Overland Camp and are a great way to get along the lakeshore, although getting to Kabale would require a king of the mountains, Tour de France style effort. 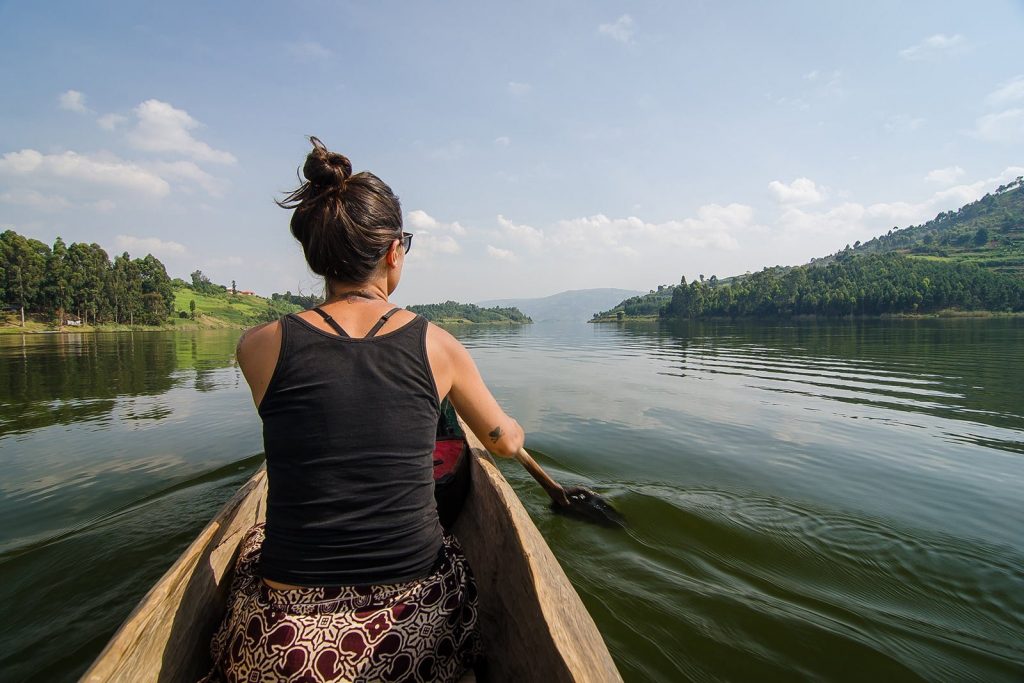 Wednesday and Saturday are Kyenvu open market days, drawing villagers from all over the region. It is a long way from all the camps around the lake and involves a three-hour trip by the dugout. However, most of the camps can arrange a rower to help out or secure a motorboat for rent. The people out here are pretty shy, so be sensitive with a camera.

There are also several Batwa villages in this part of the region, and if you can link up with a friendly guide at the market, you might be able to arrange a visit to a Batwa community. Nearer to the camps is Punishment Island, located midway between Bushara and Njuyera Islands; so named because it was once the place where unmarried pregnant women were dumped to die. Tragically, most of them did die trying to swim for shore because they usually didn’t have the stamina to make it. It is easy to spot – it has just one small tree in the center. 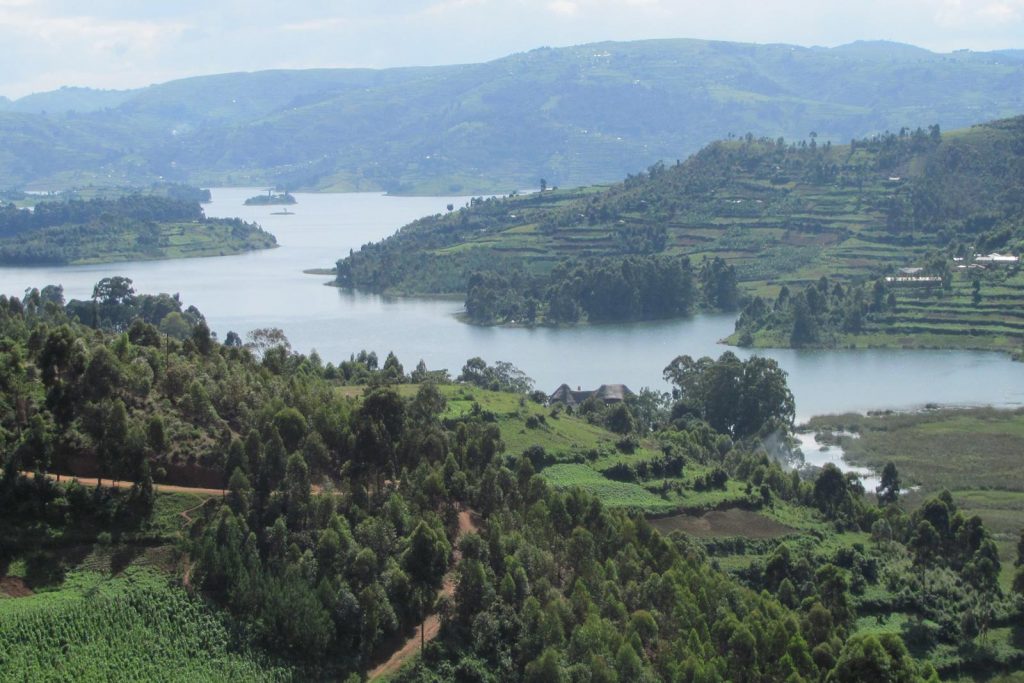 Getting To Lake Bunyonyi

An all-weather dirt road connects Kabale to Rutinda, the focal point of tourist activity on Lake Bunyonyi. If you’re driving yourself, follow the Kisoro road out of Kabale for 500m then, almost immediately after passing a Kobil filling station, turn left at a junction distinguished by several signposts to the various lakeshore resorts. After about 5km, the road reaches the hill above Bunyonyi, where there is a five-way junction — turn left for Acacia Cottages, but otherwise keep going straight ahead to get Rutinda after another 2km or so.

Note that the road branching right at this junction offers spectacular views over the lake, emerging at Muko on the main Kabale—Kisoro road after about 20km.

Motorists who are heading out to Bushara Island can park their vehicle safely at the island’s parking compound in Rutinda, and safe mainland parking is also offered for a small charge at Lake Bunyonyi Overland Camp.

For those without private transport, the Lake Bunyonyi Overland Camp runs a twice-daily shuttle to Rutinda, which leaves Kabale in front of the Highland Inn at 09.30 and 16.30 daily, and costs Ush5,000 per person. Although it’s subject to demand, it’ll take a few people but won’t make the trip for one individual.

Regular minibus-taxis and pick-up trucks, costing Ush2,000, run between Kabalc and Rutinda on market days (Monday and Friday), but the service is somewhat more erratic on other days. A special hire to Rutinda should cost Ush20,000 and a boda-boda about half that.

It’s also possible to walk to the lake along the road described above, with a slight chance of hitching a lift. A quieter, more scenic route involves following Butambuka Road west out of the town center then following local footpaths. There are plenty of villagers around to point you in the right direction.

Either way, the walkout is worthwhile in its own right, passing by traditional homesteads and patches of forest rustling with birdlife, and it should take the best part of two hours, involving a very stiff ascent as you approach the summit above the lake.

One thing you don’t want to do is hire a push bicycle to get to Bunyonyi – unless you are exceptionally fit, you’ll probably spend as much time pushing the bike up steep hills as you will cycling.

If you want to go out on the lake or spend a night or two at one of the islands, you can hire a dugout or motorboat from Rutinda Jetty. Prices are negotiable but expect to pay about Ush15,000 each way for the ten-15-minute motorboat trip to either Byoona Amagara or Bushara Island or Ush5,000 per person for a 30-45-minute ride in a dugout canoe. Bushara Island is closer than Byoona Amagara, but it’s a more expensive place. 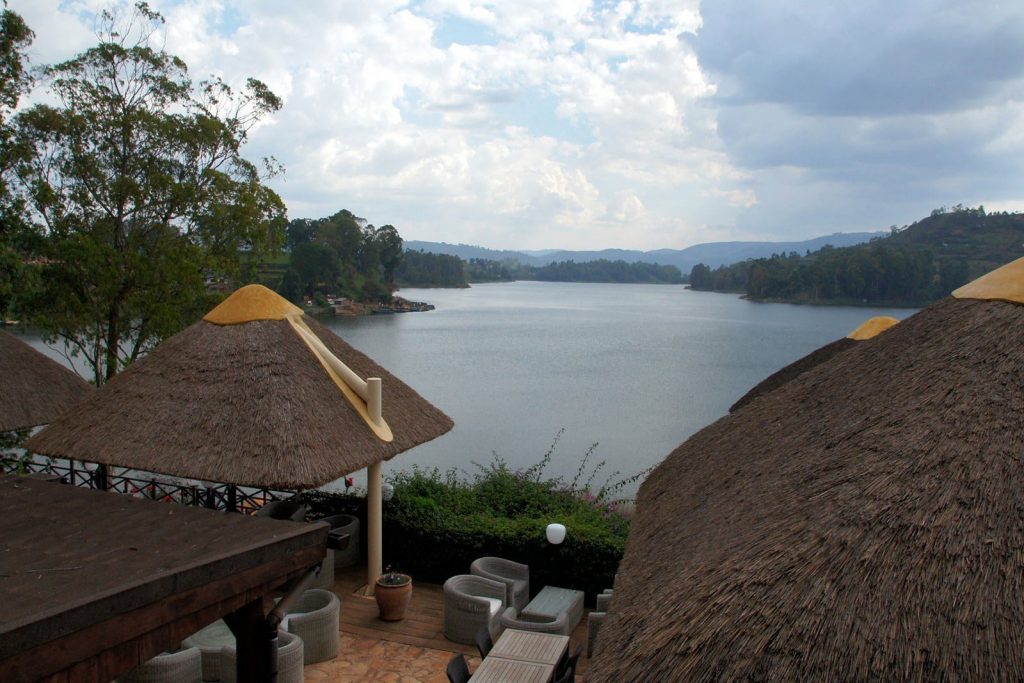 Long renowned as the top place to stay at Lake Bunyonyi, for its creative ‘geodome’ accommodations, each with its own private balcony having views of the surrounding islands and hillsides. Friendly staff, a great meals. It is also among the least expensive places in the region. Deluxe rooms have ensuite bathrooms and the facility also has basic dormitory accommodation for hipies.

Arcadia Cottages are on a hillside with spectacular panoramic views of Lake Bunyonyi. They have 12 rooms built as octagonal cottages with ensuite bathrooms and grass-thatched roofs. The place pretty gardens. The room price is $80 per night.

The Africa Explorer Ecovillage is situated on Kyabahinga ridge overlooking Lake Bunyonyi, the islands, and the Virunga Mountains bordering Rwanda and the Congo. They have African Huts, wooden cabins powered by solar with ensuite bathrooms. Domes and camping grounds for backpackers are available.

The restaurant serves organic food in both international and local dishes, but the price of meals maybe a little bit pricy for a budget traveler.

Lost Paradise Beach with a beach and a wonderful view of the lake provides accommodation in beautifully simple cottages. There is great African-European-Asian food and drink. They provide canoeing on Lake Bunyonyi for free for all residents.

Bugombe Island Gateway has a bird-watching sanctuary on Bugombe wild island and canoe trips to the 10 islands on the lake. They offer full board accommodation with simple but good meals USD 100 per person.

Bunyonyi View Resort is a favorite choice to many travelers to Lake Bunyonyi because of its varied accommodation choices. You can get a room from $15 – $100 per person. Meals will cost you from $4 to $7 and it’s a family-friendly place.

It’s built on a hillside with great views of Lake Bunyonyi.

The most popular place to pitch a tent is the Lake Bunyonyi Overland Camp, and in most respects, this is probably the best option, though nearby Kalebas and Crater Bay are might be quieter. Campers are also welcomed out on the lake at Bushara Island and Byoona Amagara.

Explore Uganda Your Own Way!

Take a looks at some of our private-tailor-made safaris that you can customize with the help of a safari expert to suit your style of travel.