There are 20 primate species in Uganda consisting of 13 diurnal and 7 nocturnal species (including the latest discovery, the dwarf galago), making Uganda a destination with the highest concentration of primates on the continent. The list includes the mountain gorilla and chimpanzee, taking the most attention from primate adventure tourists.

Six of the diurnal primates found in Uganda are guenon monkeys, members of the taxonomically controversial genus Cercopithecus.

The velvet and blue guenon monkeys, for instance, are both widespread African species known by at least five different common names, and both have over 20 recognized races, some of which authorities consider to be separate species.

Uganda also offers more profound primate viewing experiences than any other destination in Africa. Mountain gorillas and chimpanzees are the favorites for wildlife photography safaris and naturalists’ expeditions.

On a habituation experience, travelers are taken on a wilder experience with primates. Guided adventures are conducted with primatologists and rangers to a semi-habituated gorilla or chimpanzee family and allow you to spend 4 – 12 hours with the primates.

There are four ape species in the world (chimpanzee, bonobo, orangutan, gorilla ). Two of them live in Uganda (gorilla and chimpanzee). 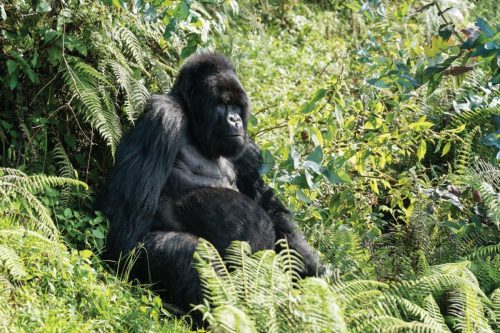 This is the bulkiest member of the primate family: an adult gorilla may grow up to 1.8m high (although they seldom stand fully upright) and weigh up to 210kg. 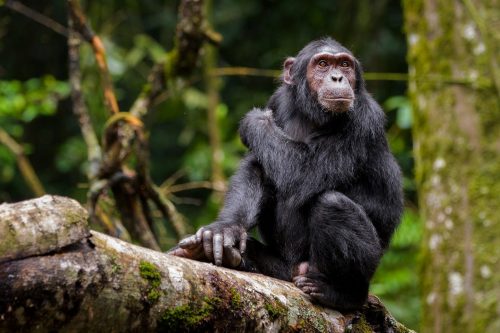 This distinctive black-coated ape, more closely related to man than to any other living creature, lives in large, loosely bonded communities based around a core of related males with an internal hierarchy topped by an alpha male.

All the monkeys found in Uganda are members of the family Cercopithecidae (Old World Monkeys). 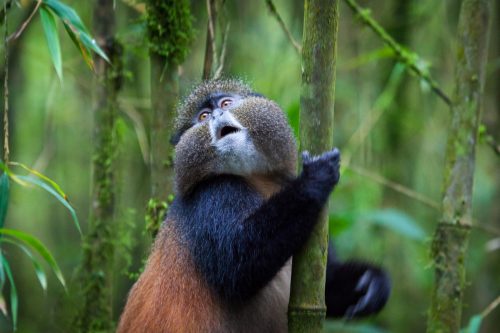 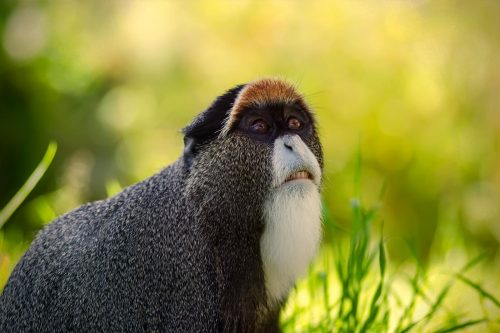 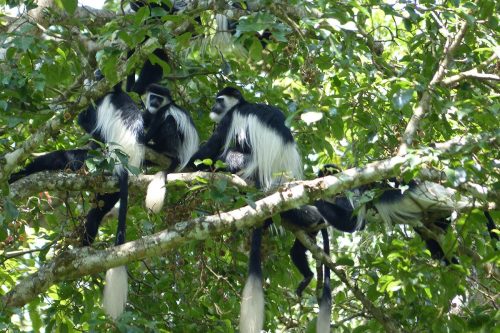 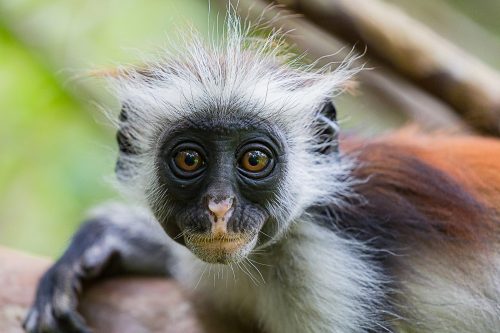 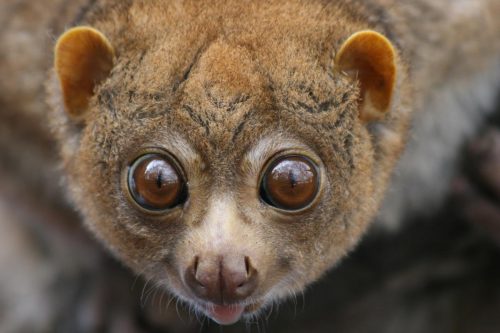 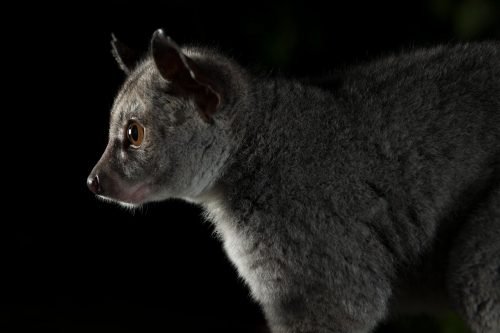 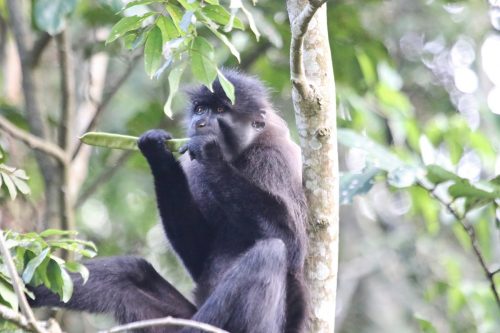 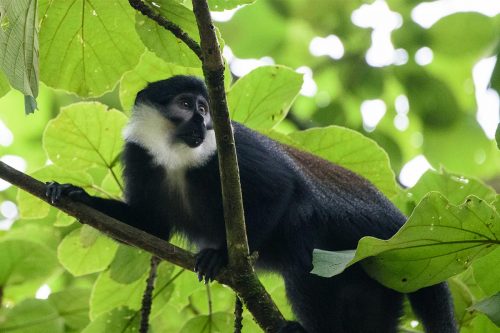 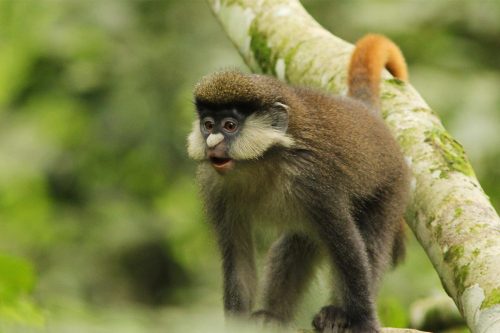 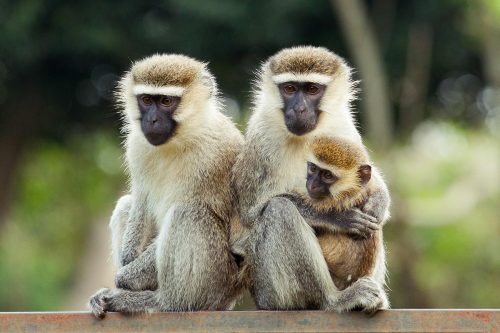 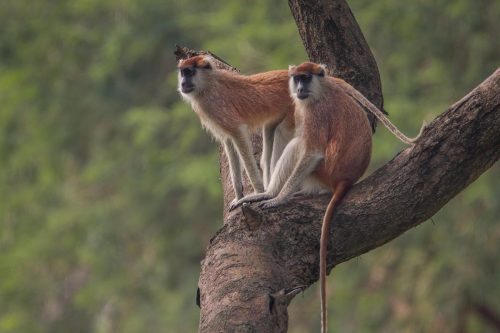 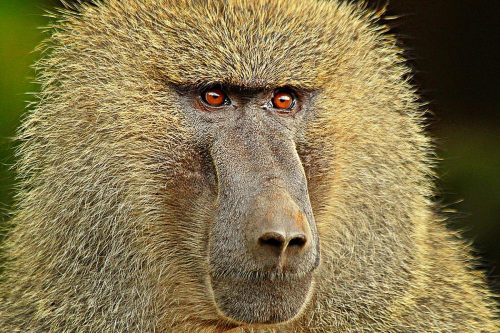 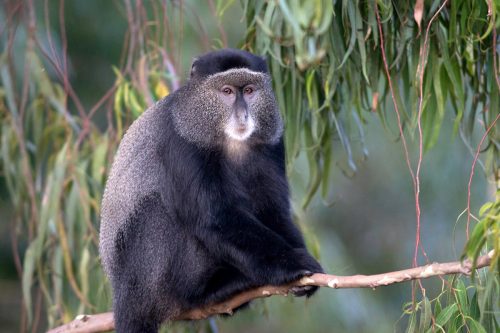 Seldom observed on account of their nocturnal habits, the prosimians are a relict group of primitive primates more closely related to the lemurs of Madagascar than to the diurnal monkeys and apes of the African mainland.

Also called galagoes, these small, nocturnal primates are widespread in wooded habitats in sub-Saharan Africa. The bushbaby’s piercing cry is one of the distinctive sounds of the African night. Read more

This medium-sized sloth-like creature inhabits forest interiors, where it spends the night’s foraging upside down from tree branches. It can sometimes be located at night by shining a spotlight into the canopy. Read more

Uganda offers the best primate viewing options worldwide. Uganda boasts of the highest concentration of primate species on the continent, and numerous troops have been habituated for primate tourism within their natural habitat.

The best place to see chimpanzees and several other small primates are in Kibale National Park. Kibale has 13 primate species, and the crowds’ attraction is the chimpanzee. From Kanyancu, chimpanzee tracking excursion head out every morning and afternoon for a permit of USD 150. YOu can see other primates on a nature walk around Bigodi swamps.

The other notable place to see primates in Uganda is Bwindi Impenetrable National Park, where you see the mountain gorillas in close proximity. Bwindi offers four trailheads where you can base to see a mountain gorilla family for the price of a permit at USD 700 per person and spend at least one hour with the giant primates.

Uganda also offers more profound experiences with gorillas and chimpanzees, becoming a favorite for wildlife photographers and naturalists. On a habituation experience, you trek with primatologists and rangers to a semi-habituated gorilla or chimpanzee family and spend four – 12 hours with the primates. Chimp habituation costs USD 200, and gorilla habituation permit costs USD 1,500.

Use a local operator to help you secure your primate permit in Uganda. One we can highly recommend is Nkuringo Safaris. They have been taking travelers to see primates in Uganda since 2007 and they operate two lodges with multi-awards.

Get updates and more